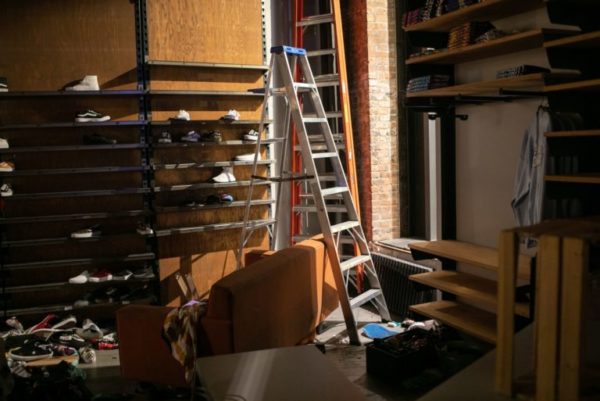 Al’s, a sporting-goods store tucked in Wilmington, Delaware’s small shopping district, opened during the Great Depression, weathered World War II and has been able to keep workers on the job during the coronavirus pandemic. But this past weekend delivered a new challenge.

Owner Bob Hart closed the 17,000-square-foot shop at 4 p.m. Saturday as protesters walked Market Street, blocks away. A few hours later, around 8:15 p.m., the first of the store alarms went off. Looters who followed the peaceful demonstrations broke windows at the store and stole the majority of Hart’s inventory, including about 10,000 pairs of shoes.

Hart is among business owners digging into the details of their insurance policies to see what losses might be covered. Hart said he’s confident his claim will be successful, but that doesn’t make the process an easy one.

“For every item I’m missing, I have to supply an invoice. That could be real tough,” he said, with some items purchased a year or two ago. “You just gotta try to work through it.”

Did Debate Over Business Income Insurance Just Get More Complicated?

Business income claims due to riots and civil unrest could reflect revenue loss from virus-related shutdowns or receipt of funds from the Paycheck Protection Program.

While the industry expects a significant event, it is premature to determine the volume of property loss since it is an ongoing event.

The industry has already labeled the riots as a national catastrophe since insured damage will meet $25 million.

Protesters have come out in droves across the U.S. to speak out against the killing of George Floyd, an unarmed black man who died after a white Minneapolis police officer knelt on his neck for more than eight minutes — the latest incident of brutality against African-Americans. While the protests have been largely peaceful, some people have used the unrest as an opportunity to vandalize and loot stores in cities including New York, Los Angeles and Wilmington.

“It was wrong what they did to George Floyd — it’s sickening,” Hart said. “But when you take it out on somebody like me, who just has a small business,” he said, trailing off while shaking his head.

Tensions were high overnight as large crowds gathered in New Orleans and New York, yet the ninth straight night of protests over Floyd’s death remained largely peaceful in most cities.

On Top of Covid

The civil unrest comes as business owners continue to cope with the economic impact of the Covid-19 outbreak, which also required them to analyze the fine print of their insurance policies. While there’s been a debate about whether business-interruption insurance covers retailers’ pandemic-related losses, property damage from riots, civil commotion and vandalism are generally covered under standard policies, according to the Insurance Information Institute.

The insurance industry has argued that business-interruption coverage wouldn’t pay for virus losses because of a physical-damage requirement, an issue now being fought over by business owners, attorneys and lawmakers. The situation is clearer when there are broken storefronts from looting, said Kim Winter, who leads Lathrop GPM’s insurance recovery and counseling practice group.

“Here we know that there is actual direct physical damage — there’s no question about it, it’s more than just a microscopic virus, so that’s the difference,” she said.

Winter and Hahn Pam, an associate at Lathrop GPM, said policyholders should try to alert their insurers quickly, even though the protests are still going on, and study their coverage closely. While property damage is often covered, the double-whammy of the pandemic and looting could mean business-interruption claims become more complicated down the road, Winter said.

The 1992 riots in Los Angeles were the costliest civil-disorder event in U.S. history, totaling about $775 million in insured damage at the time, according to the insurance institute. That pales in comparison to damage done by some natural disasters, including Hurricane Katrina, which resulted in $41 billion in insured losses.

Meyer Shields, an analyst at Keefe, Bruyette & Woods, said in a June 1 note that the firm’s best guess is that insured damages should be “relatively modest,” but that the combination of those losses, costs tied to the pandemic and a hurricane season forecast to be stronger than normal could weigh on insurers.

“P&C insurers such as AIG, Chubb and Travelers may see manageable losses from riots across the U.S. possibly topping $2 billion, in our view, given the broader geographical exposure than previous unrest.”

For now, business owners on the front lines are the ones navigating the aftermath. It isn’t clear when Al’s, the sporting-goods store in Wilmington, will be able to restock, with some suppliers unable to ship goods for weeks because of the pandemic, Hart said after putting a thick chain and padlock on the store’s temporary plywood door.

Dias said he’d let his insurance policy lapse after closing more than two months ago because of Georgia’s Covid-19 lockdown. It was hard to cover the costs as well as his $20,000 monthly rent in the ritzy Buckhead Village plaza, he said. Dias had planned to open on Monday, but found the windows smashed and store ransacked when he stopped by at 5 a.m. Saturday. For now, he’s started a fundraiser and is counting on the generosity of customers to reopen.

“This store is very famous,” said Dias, whose shop’s Instagram page is filled with pictures of Atlanta hip-hop artists and other celebrities with his apparel. He vents at the injustice of looters targeting a black-owned shop. “We’ve been here for almost four years, so people know us.”